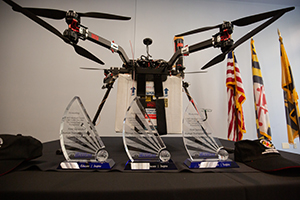 A history-making drone flight that opened the door for new methods of delivering transplant organs has been honored by the American Helicopter Museum and Education Center (AHMEC).

On October 20, AHMEC conferred an Achievement Award on the organizations involved in the April 2019 flight—the UMD UAS Test Site, the University of Maryland Medical Center (UMMC), and the Living Legacy Foundation.

“What we really appreciated about this project was not only the technology itself, the use of the drone, but the fact that it was done for life-saving purposes,” said AHMEC board past president Bob Beggs. “The history of rotor-wing aircraft is about saving lives, and this is a really unique example.” 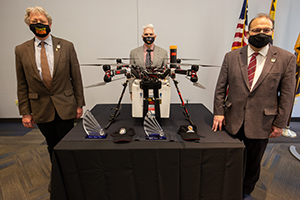 The organ flight was the brainchild of UMMC transplant surgeon Joseph Scalea, who recognized the potential of using drones to improve on existing methods of delivery. Contacted by Scalea, UMD aerospace engineering chair Norman Wereley was receptive to the idea of testing a drone delivery method, and the UMD UAS Test Site—part of the aerospace engineering department—began to design and test a vehicle capable of carrying out such missions.

In April 2019, UMD’s custom-built LG-1000 drone flew approximately three miles from outside the Living Legacy Foundation’s Baltimore headquarters to a helipad at UMMC, successfully delivering a kidney that was transplanted into a waiting patient, Trina Glispy.

“What we really appreciated about this project was not only the technology itself, the use of the drone, but the fact that it was done for life-saving purposes."

The flight was among seven achievements considered by AHMEC for the award, with the museum’s board of directors making the final selection. Past awardees have included AgustaWestland, for achieving an around-the-world speed record in a helicopter; Sikorsky for the X2 helicopter; Kaman Aircraft and Lockheed Martin for designing an unmanned version of the K-Max helicopter; and Jeff Bezos for Amazon Prime Air.

The University of Maryland’s A. James Clark School of Engineering is now a two-time AHMEC Achievement Award winner: in 2011, the aerospace engineering department’s Gamera human-powered helicopter was chosen for the award.

Missions such as the organ flight reflects UMD’s mission of serving the public good, said UMD UAS Test Site Director Matt Scassero. “The Clark School, as well as the university as a whole, is dedicated to research that brings benefit to society, including engineering for humanitarian purposes.”